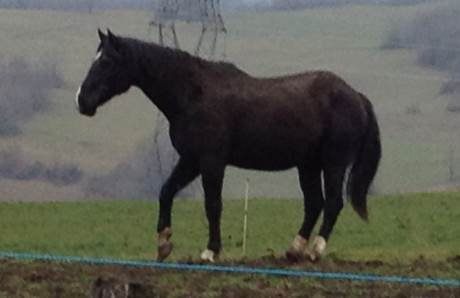 Duke was bought by a Belle Ferme horse owner who had unfortunately lost her previous horse. After a few years, she had to move abroad and was unable to take him so he was sold on to his next owner, who in turn rode him and competed with him, before leaving to university. He was then handed down to the next rider. He was never sold for very much, mostly just the guarantee that he would always stay at Belle Ferme, which had become his home. His last owner also left to university abroad, but by this time Duke was already 19 years old, and no one was willing to take him on. Duke was left in our good hands, and managed to fit in a couple of years as a much appreciated riding school horse, before needing to retire.

What's special?
When his first Belle Ferme owner had him, Duke had a severe colic, and needed urgent treatment. Lyn and Attila drove him to the Lyon Horse Hospital at 1:00 in the morning, with Duke in pain scraping the back of the trailer, even though he had been given strong medication for the journey. It was a stressful 2 hour and 15 minute drive, during which he kept scraping. About 15 kms before arriving, the noise stopped. Lyn was even more stressed by the sudden silence, but just kept driving to get to the hospital as soon as possible. On arrival, opening the trailer door, it was the biggest relief to see him standing looking at us! He was taken charge of very quickly, well cared for and was able to come home a few days later. He could so easily have passed away that night, as we were told another half an hour would have been too late to save him. I remember driving home, and arriving back at 8:00 in the morning, just in time to start the day’s work.