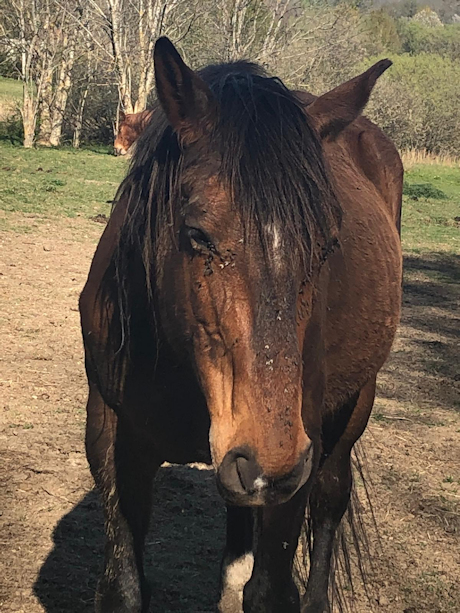 Kosmos was bred to be a fine show jumping horse. At the age of 4, however, he had a crack in the wall of his hoof, from the top downwards. Even with corrected shoeing, the crack wouldn’t heal. So he was proposed to David to ride as a dressage and leisure horse. As long as he didn’t jump, his hooves were fine. Due to David’s back pains, he was sold on to a rider here, who spent much money, time and effort with blacksmiths trying to resolve the problem in his hoof, but without success. Kosmos then joined Belle Ferme as a riding school horse. He was first turned out in the field for several months with no shoes on, and amazingly the crack finally cleared up and he could be ridden normally, although we were always careful and watching what he could do. Due to signs of arthritis, Kosmos was retired.

What's special?
Kosmos was stabled and lived inside most of his life. It was never easy to keep him looking fit and well, but he has never looked as good as he does now living out at grass!