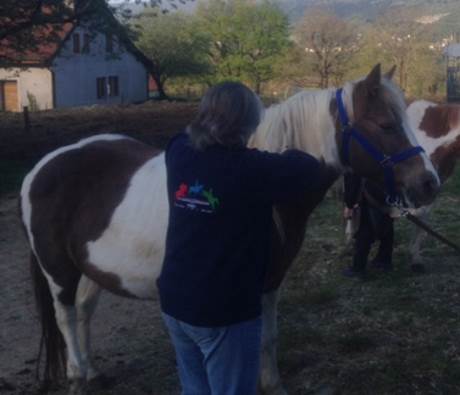 Mirka was bought from a pony club in Nantua, not far from home. We were looking for some Shetland ponies to buy, and we did need a bigger pony too, so we went to have a look at her after she had been advertised in a local paper. We returned with Mirka and three Shetlands: Saxo, Kazimir and Rufus. Mirka was a great member of our horseball team for a few years. She was adopted by Anais, a teenage rider at our stable at the time. Tragically, Anais lost her mother, and was unable to keep up the costs of Mirka, so logically we accepted to keep her.

What's special?
We chose Mirka among many ponies in a big field. We decided on her and two Shetlands, Saxo (because he had a lovely face with a funny bump under his huge forelock!) and Kazimir. As we led the three ponies away, we heard whinnying in the field. Mirka started whinnying back, visibly replying to someone. There was a walk of about a kilometre to where the lorry was parked to load them. The whinnying went on, and the man selling us the ponies was getting quite cross with Mirka for making such a noise. We suddenly heard the sound of little hoof steps galloping down the quiet country road, and turning around we saw a little Shetland pony galloping towards us, still whinnying. It was Rufus, who was apparently Mirka’s best friend. He had escaped from the field to come after her. So of course, Rufus came home too!