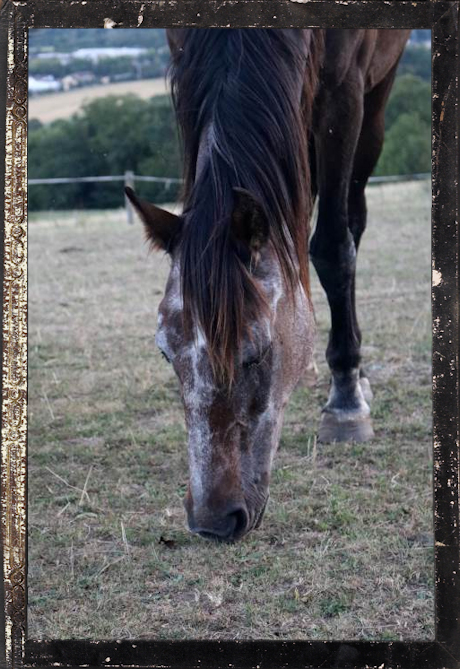 Tulipe Varfeuil known to us as “Tippa” was bred and born in nearby Crassy, a trotter race horse stable. At the age of 2 years, she harnessed up and prepared for racing, however, she wasn’t fast enough round the bends, and didn’t make the selection tests. The owner of the racing stable would sometimes offer horses in this situation to us, as they were worth no more than the price of their meat, which was unfortunately their destiny if they didn’t find owners. A client of ours, Iris, bought her, loved her and started training her. A tragic loss of a family member meant Tippa’s family had to move back to the United States. Unfortunately, the family was not able to take her with them.

What's special ?
Tippa became Angela’s horse. Being a trotter, cantering was never easy for her, but she has, as is known for trotters, a hugely generous heart, and became a super jumping horse. She was, however, much happier jumping 130 cm from a trot, rather than anything smaller from a canter! With Angela too busy to ride as much as she would have liked, Tippa was used for the riding school too. Tippa was a great all rounder, and in the field she is always the wise leader of the herd!