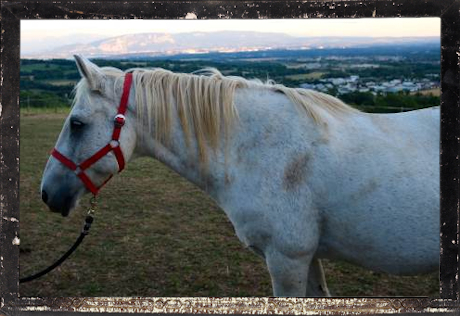 Silver Star, or Star for short, was bought in Lelex in the Jura. He came with his best friend Arrow (on the drive home, they were named Silver Star and Silver Arrow). Star was almost black when he came to us, and as is the case with many horses, he became lighter over the years until becoming grey-white. Star was a good safe pony most of the time, but could be known to have moments where he could get quite bouncy in his younger days, particularly when going round a cross country course!

What's special?
When older, Star developed an allergy and started coughing quite a lot. He had to be kept away from dry hay most of the time, so he was put in a separate field with Looping, who has become his inseparable friend. His old friend Arrow sadly died a few years ago, and we sometimes wonder if the loss of his friend is what provoked Star’s cough, as this only appeared after Arrow died.